The Autonomous Driving Platform: How Will Cars Actually Drive Themselves?

Ceding control of a vehicle to a computer may induce anxiety, at least until people realize that most of us have been doing it for years -- every single time we have traveled on a commercial airliner. Except for taxi and takeoff, these planes not only use automation in the form of autopilot, it is required by law.

The autopilot function on airplanes has been around for decades, so why has it taken so long to bring similar technology to passenger vehicles?

There are many more variables on the roads than in the air.

Controlling a vehicle in a highly complex environment is more complex than a plane flying through an open sky. While the vehicle speeds are much lower, the proximity and number of complicating risk factors, such as pedestrians, and other vehicles (often only a few feet away – and some pop out as if out of nowhere), means that much more sophisticated systems and algorithms need to be developed for safe autonomous vehicle operation.

This is where Aptiv thrives.

As an industry leader in sensor fusion – building on its history of the first radar/vision fusion system introduced a decade ago – Aptiv has been developing advanced safety systems as a part of an autonomous platform for years.

How has autonomous technology made its way into vehicles? 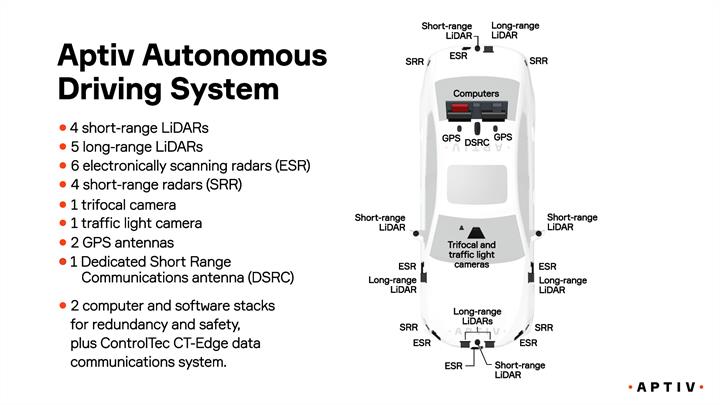 Control of the Controls
The earliest examples of advanced driver assistance systems (ADAS) were vehicle controls, and their job is to dictate steering, braking, and acceleration. You may be surprised to know they have been in use for several decades.

Take anti-lock brakes (ABS) brakes as an example. They’ve been around so long that many people under 40 have likely never experienced their brakes locking up, causing a spin-out. When coupled with electronic stability control (ESC), vehicles are less likely to spin-out, which was once very common, because they are more controlled with ABS. This is thanks basically to a little computer.

More recently, lane keeping assist added another level of sophistication to ADAS systems by sensors that "see" lane markings and help keep vehicles in their lane by gently nudging it back if they stray. These sensors send their input to a computer, where it is fused with other data and the car reacts.

For almost 20 years, Aptiv has been supplying advanced driver assistance systems and instrumental in bringing ABS, ESC and lane keeping assist to market. These technologies are the building blocks for more advanced, fully autonomous driving.

With those the building blocks in place, the other requirements for self-driving vehicles will go something like this.

Digital Sensorium
People perceive data through their eyes, ears, smell, touch and taste. For a vehicle to drive itself, it must have this highly developed sensing ability, mimicking these same human functions. Inputs from cameras, radars, LiDARs and a kind of “digital ESP,” what Aptiv calls vehicle-to-everything or V2E, all have to be processed by a very advanced computing platform, which acts as the brain.

All of these perception systems allow the vehicle to have the necessary data to safely drive the car, but as with human drivers, the hardest part isn’t the seeing, it’s the thinking and doing that gets us from Point A to Point B safely.

Brains: Making Sense of the Data
In addition to needing proactive vehicle control and good “eyesight” to see the road ahead, software and the hardware are necessary make sense of it all. The software interprets the data, plans the path or route, and sends control inputs to the vehicle at extraordinarily high levels of speed to maneuver safely in its environment.

The autonomous driving platform Aptiv is developing with partner Mobileye, has the capability of a Formula 1 driver, but in this case, it’s not about driving at high speeds. It’s about highly evolved decision-making and control-computing platform.

Getting from Here to There
Aptiv has years of experience in developing active safety systems, including the recent launch of the industry’s first centralized computing platform with Audi zFAS system. These Level 3 and 4 automated driving applications are the basis for building fully autonomous Level 5 vehicles. Using Ottomatika and nuTonomy algorithm platforms, the foundation of the Aptiv autonomous driving platform, provide capability in drive perception, planning, and motion control for fully autonomous solutions.

The ultimate objective is safer, more efficient, more convenient mobility. Aptiv’s capabilities demonstrate it is possible to not only replicate the perceiving, processing, and thinking of human drivers, but to make it a reality. And this is a good thing, since driver error causes more than 94 percent of motor vehicle accidents, according to the National Highway Traffic Safety Administration.

With our goal to significantly reduce the number of car accidents and fatalities, Aptiv has developed the underlying electrical architecture, software and computing expertise, both in-house and by partnering with companies and universities on the leading-edge of autonomous driving technology.

Aptiv is making the future mobility a safer, greener and more connected.