Where’s Aldo? We sent him on a two-week expedition to the South Pole.


It’s hard to imagine that two weeks in Antarctica could have an impact on Earth’s story – billions of years in the making –  but we hope it might.

Starting February 25th,  we’ll follow Aldo Gomez on his journey to the South Pole as part of the Climate Force: Antarctica 2018 expedition. Aldo is Aptiv’s global director for Environmental, Health and Safety (EHS)… And here’s his story.


The challenge
While representing Aptiv at the 2017 corporate eco-forum annual leadership retreat, Aldo found a challenge he couldn’t back away from. He listened to a presentation on protecting Antarctica. Not a PowerPoint of just facts and figures, but stories you could only tell if you’ve walked the farthest reaches of the planet.
The presentation was by Rob Swan, the first person in the world to walk to the North and South Pole, and focused on the countdown to 2041. That’s when Antarctica’s designation as a “natural reserve, devoted to peace and science” will be up for re-negotiation.

At the event, Swan talked about his work to create awareness for the protection of Antarctica by calling for local action. Then he invited Aldo to join in the challenge: a two-week hike in the arctic where he could inspire change.

Shared inspiration
Aldo was inspired growing up to become a chemical and environmental engineer after watching multiple Jacques Cousteau’s videos and documentaries about marine life and its protection.

In addition to his work as an explorer, inventor, and documentarian, Cousteau also mentored Swan.

“I was talking to Rob after his presentation and he mentioned one thing Cousteau told him was ‘If you want people to change their ways, you will need a story.”

Swan explained that this advice is how he ended up embarking on a yearlong challenge of finding support, funding and the physical strength to achieve what no other human had done before.

“I was inspired by his story,” says Aldo. “I have always already been inspired by his mentor and I believe that it’s my job – as a leader on these topics for Aptiv – to try to be inspiring to our team, to all of our employees. I want to inspire them to do more, to be bold with their actions and to pursue the impossible.”

“This is not a vacation in Antarctica”
During his two week trek to the end of the Earth, Aldo will not only learn how to survive in the Arctic. He’ll also receive training on leadership, public speaking, strategic thinking and ways to maximize impact in his role at Aptiv.

“Through this trip, I want to show our teams across the globe that what we do on a local level has an impact at a larger scale,” says Aldo. “What they are doing in their own work station day in and day out matters.”

Aldo has quite a few personal and professional goals for this trip, which was made abundantly clear by the organizer that “this is not a vacation in Antarctica.” The most obvious goal is to help Climate Force in their mission to eliminate 326 million tons of CO2 from the atmosphere by 2025. But the underlying reason is to come away with a story. A story that we can all connect back to and see the importance of our efforts to make mobility safer, greener, more connected. And to potentially inspire somebody else to make the trek next year. 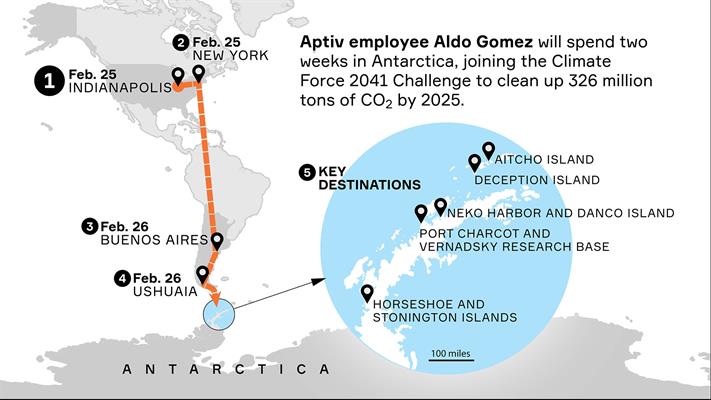