Using the advanced technology in smart electrical centers, Aptiv recently demonstrated to a major OEM that it could eliminate one of three traditional electrical centers in one of its vehicles, save 4.4 pounds (2kg) in weight, reduce power requirements by 57 watt hours (Wh) and reduce overall cost by $40 — all while improving functionality.

Smart electrical centers are power distribution devices in a vehicle that replace traditional melting fuses with smart fusing and electromechanical relays with solid state switches. In this study, Aptiv changed 17 traditional fuses to smart fuses and replaced 22 electromechanical relays with solid state switches. The change eliminated the coil wires associated with each of the relays, while also allowing other wires to move to smaller gauges.  Two wires were added for a Controller Area Network (CAN) bus connection, which can be easily migrated to Automotive Ethernet in the future.

The approach also allowed for up-integration of various functions, putting more content into fewer physical boxes. The study proposed up-integrating a discrete module into a smart electrical center, as well as switch functions that included the hood latch and the indicator for low washer fluid.

In addition to reducing weight, power consumption and costs, moving from traditional electrical centers to smart electrical centers improved functionality. For example, the system is able to share diagnostic information over the vehicle network, detecting and reporting on everything from open loads and short circuits to overloads and underloads. It also enables enhanced power management, as it is capable of isolated power shedding.

Aptiv’s smart electrical centers have been in production since early 2019, and they represent an important first step toward next-generation electrical/electronic architectures such as Aptiv’s Smart Vehicle Architecture™. 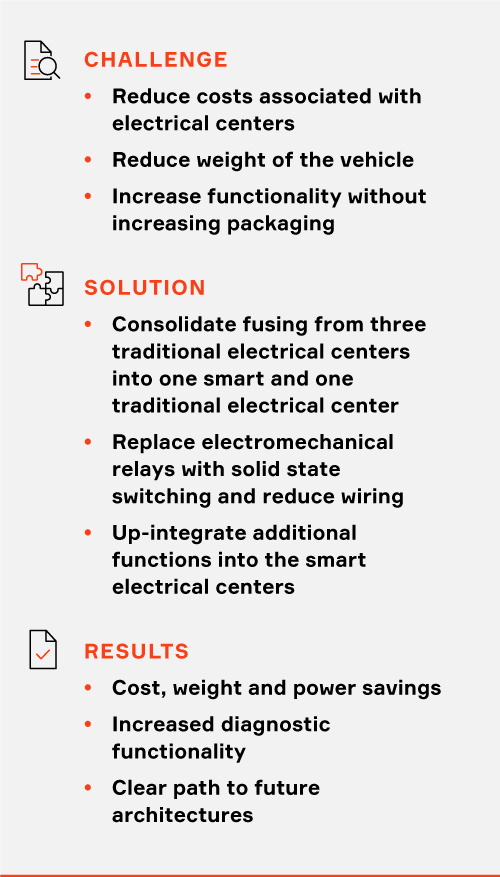 Smart Electrical Centers Are a No-Brainer