Aptiv’s expertise in computing platforms, software-enabled safety features and autonomous driving provides life-saving solutions in the real world. A world in which 94 percent of accidents are influenced by driver error, and every 30 seconds, fatal car accidents. In fact, studies show just a half a second can mitigate or prevent 60 percent of accidents. But if you’re in a vehicle, a half second is critical. It’s about how long it takes to blink once.

These are sobering statistics. And while passive safety systems are essential, they are focused on protection, not prevention. Solving this massive problem requires advanced active safety technologies to stop crashes before they happen.

How do we solve for that?
Aptiv provides a number of solutions including automatic emergency braking, forward collision warning, rear automatic braking, traffic jam assist, automatic cruise control and lane keeping. Together, these systems can deliver the half second needed to avoid a crash. Individually they’re powerful preventers of crashes: Rear automatic braking can cut backup collisions by 62 percent while automatic emergency braking can reduce front-to-rear ones by 50 percent.

But whether you’re in the city or on the highway, Aptiv solves these problems by bringing together our smart vehicle architecture, interior sensing and safety applications with our software and systems integration expertise. The systems we’re developing now go beyond “distraction management” to “attention management.” Aptiv’s technology is able to see not only if your eyes are on the road, but to what level you are physically, mentally and emotionally available.

As vehicles become increasingly defined by software, software-enabled features are driving more content. What that means is that vehicles need more computing power than ever before – it’s as if that car you drive to work is becoming a supercomputer. This computing power is a foundational element of Aptiv’s Smart Vehicle ArchitectureTM.

Aptiv uniquely integrates whole systems through smart vehicle architecture expertise, which enables the electrification, active safety, automation, and connectivity that is driving this new mobility. Only Aptiv has a three-layer, fail-safe design for power, data and compute, so if you lose any one of those, you can reroute and keep everything fully operational – especially your safety features. This ensures that our architecture is sustainable and resilient, meaning it contemplates and addresses multilayer system fault tolerance and meets redundancy requirements for the highest level of automotive safety integrity. 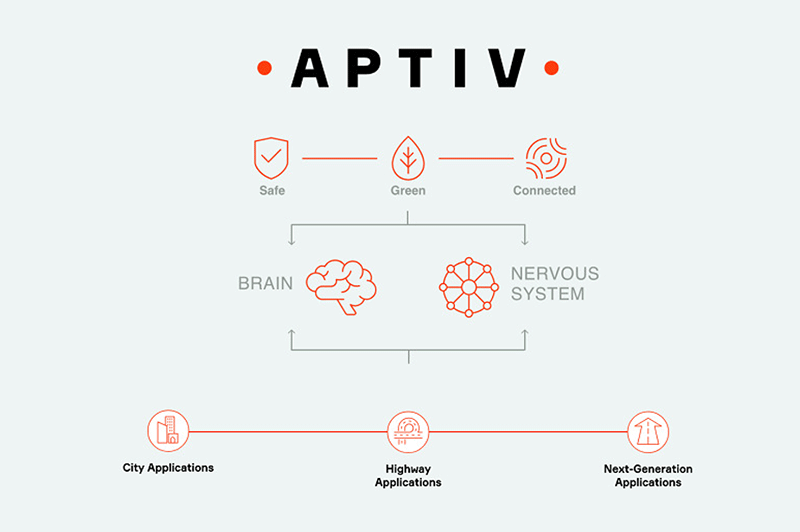 So what’s next?
Autonomous vehicles have the potential to substantially improve road safety, but they’ll need a sophisticated, human-like ability to do more than just obey traffic rules. Aptiv uses a structured artificial intelligence (AI) approach, which means starting with the rules of the road, and then integrating the strengths of AI, neural networks and machine learning to give vehicles the practice they need to learn – allowing autonomous vehicles to behave like we do.

Imagine for a moment that you are driving down a road. You are in the right lane, and you know that you have to make a left turn ahead. As you drive, you are looking at the cars around you, keeping an eye on the distance to your upcoming turn. If traffic is heavy, or if the next turn is close, you will be more assertive in your lane change. The opposite is also true. If traffic is light or if your next turn is far ahead, you will be more conservative in your maneuvers. Aptiv uses AI to weigh the behavior of the objects around it and balances that against its goal, which is to move into the left lane. This allows the car to decide if it needs to be more assertive or more conservative in achieving its goal.

The vehicle “learns” pre-determined, generalized rules for basic safe operations and then uses artificial intelligence to solve for the optimal path. That means that instructions have been coded into an algorithm, or set of rules the car follows, thereby creating a vehicle capable of making decisions using AI.

AI is used primarily in the vision space, whereas machine learning is used to improve object classification and recognition. Machine learning relies on a “neural net” – because it’s designed to behave like the human brain. The neural net lives onboard the vehicle and classifies objects in real-time. From here, the vehicle can “follow” specific rules. It’s very complicated and part of the reason why a hybrid approach, which incorporates AI with machine learning, helps autonomous vehicles “drive” more like a human.

For example, in certain cases, such as a red light or when another vehicle is stopped in the roadway, it is important the vehicle always stops. But in others, such as when a plastic bag is blowing across the street, it’s better for the vehicle to recognize that the object is not an obstruction and is safe to continue forward.

Aptiv’s approach to structured AI means that autonomous vehicles can handle the complex driving scenarios we experience every day – to make our world better.


Further supporting this approach, Aptiv just opened a major Technical Center in Las Vegas, which is home to our end-to-end autonomous mobility business. Aptiv’s autonomous vehicles are supporting more than 1,600 destinations across Clark County and the City of Las Vegas, including popular entertainment venues, the Las Vegas Convention Center and City Hall. To date, the program has completed more than 25,000 paid autonomous rides, while maintaining a nearly perfect average passenger rating of 4.95 out of five stars.

Aptiv also has pilot programs in several other cities around the world, including:

Vehicles are becoming extraordinarily smart, capable and the largest source of data worldwide. They’re connecting to the world around them – infrastructure, other vehicles and entire cities. Imagine a world where automated mobility can help:

Aptiv’s technologies and capabilities are powerful on its own. But integrated together, they represent a complete mobility solution, only available from Aptiv. Aptiv’s vision is to make the world safer, greener and more connected than ever before – and is passionate about the possibilities. Mobility has the power to change the world, and Aptiv has the power to change mobility. This is what moves Aptiv. 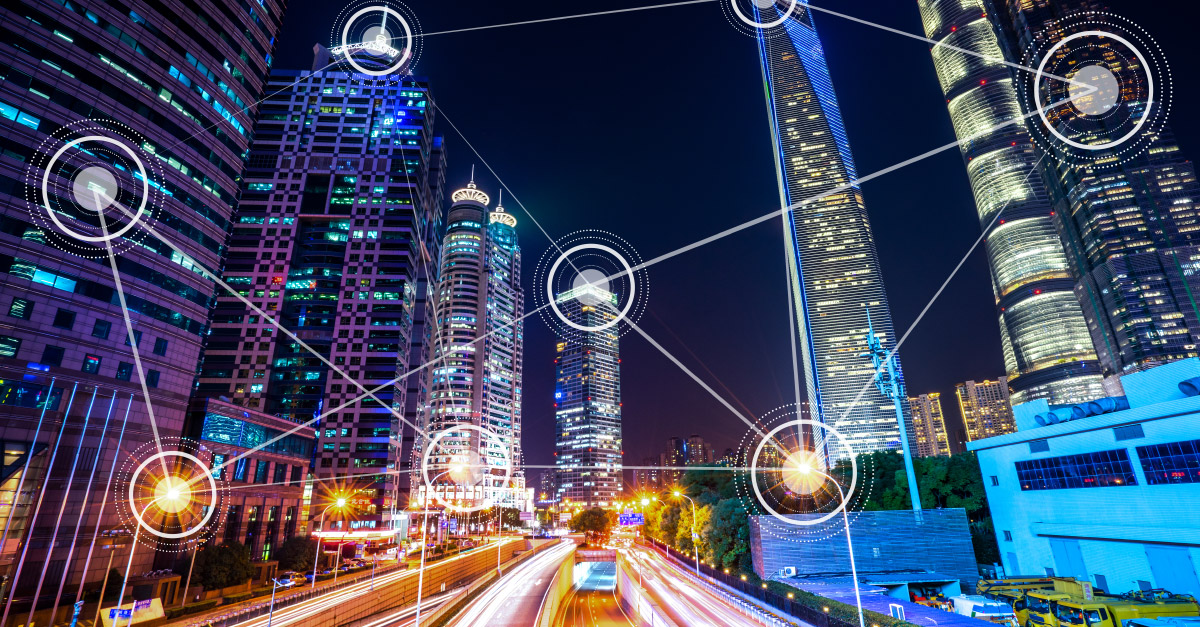 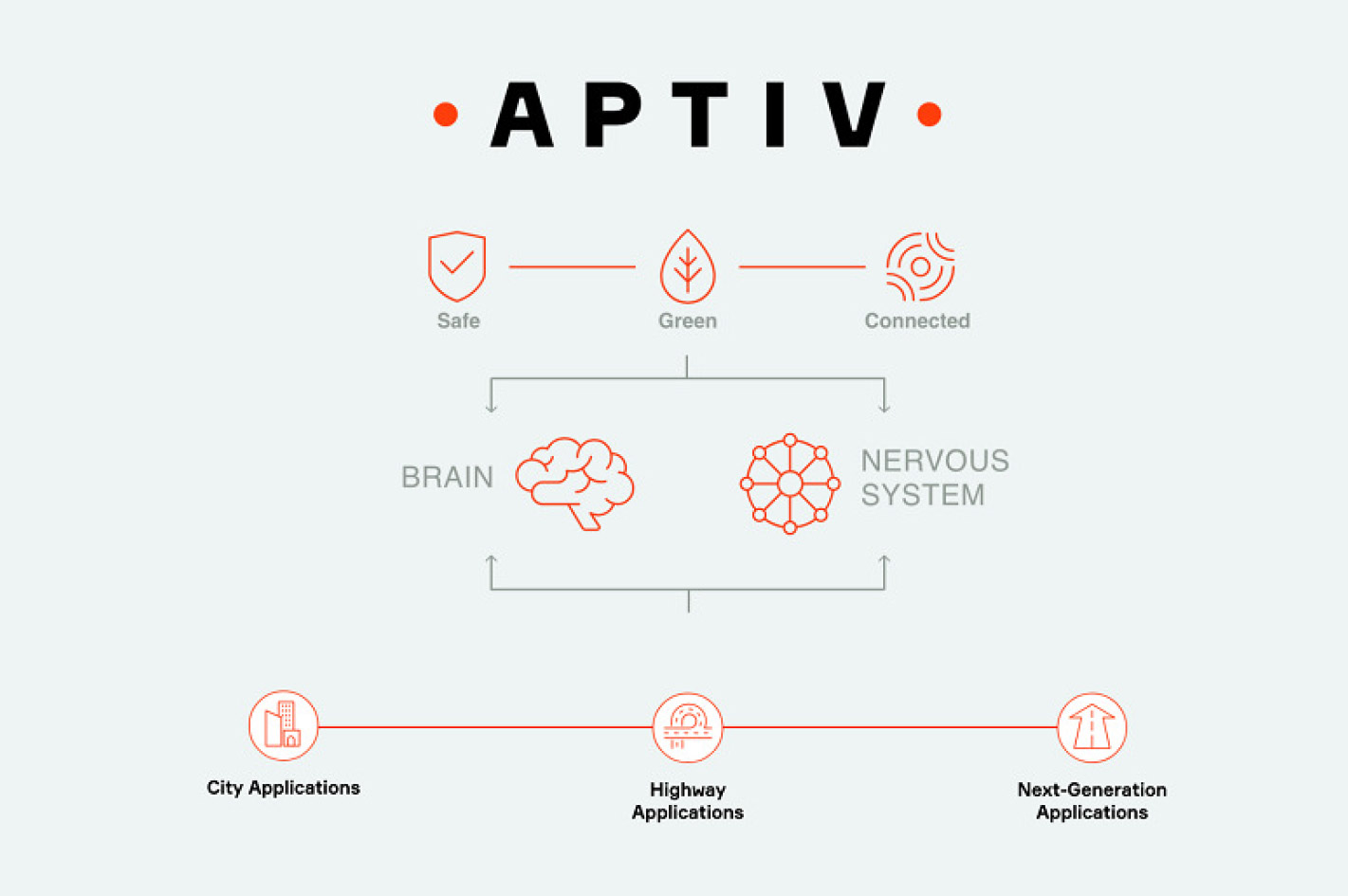