Mobility Insider
November 05, 2020
Automated driving is not an all-or-nothing proposition. Far from it. Automakers are incrementally adding active safety and self-driving features to their vehicles. These features generally fall into logical groups based on how they combine acceleration and braking (called longitudinal control), and steering (called lateral control).

Some features have the exact same functionality, but differ in the degree of human control vs. autonomous system control of the vehicle, so they correspond to different levels of driving automation. 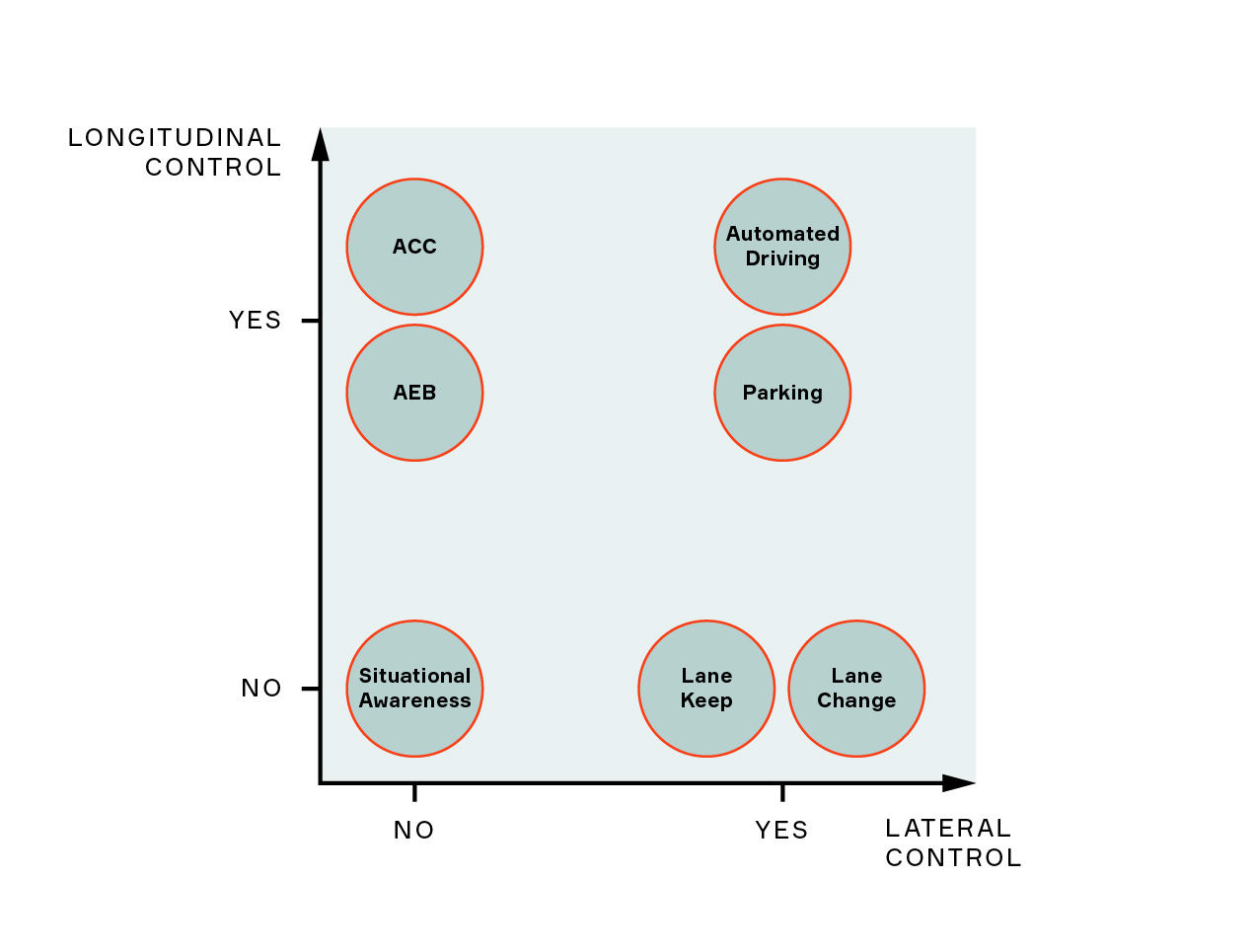 The Society of Automotive Engineers (SAE) developed an industry-standard scale from zero to five to describe this continuum, although there are many gray areas where features might overlap. Here’s what those levels generally mean:

Level 0: No Automation. The driver is completely responsible for controlling the vehicle, performing tasks like steering, braking, accelerating or slowing down. Level 0 vehicles can have safety features such as backup cameras, blind spot warnings and collision warnings. Even automatic emergency braking, which applies aggressive braking in the event of an imminent collision, is classified as Level 0 because it does not act over a sustained period.
Level 1: Driver Assistance. At this level, the automated systems start to take control of the vehicle in specific situations, but do not fully take over. An example of Level 1 automation is adaptive cruise control, which controls acceleration and braking, typically in highway driving. Depending on the functionality, drivers are able to take their feet off the pedals.
Level 2: Partial Automation. At this level, the vehicle can perform more complex functions that pair steering (lateral control) with acceleration and braking (longitudinal control), thanks to a greater awareness of its surroundings.
Level 2+: Advanced Partial Automation. While Level 2+ is not one of the officially recognized SAE levels, it represents an important category that delivers advanced performance at a price consumers can afford. Level 2+ includes functions where the vehicle systems are essentially driving, but the driver is still required to monitor the vehicle and be ready to step in if needed. (By contrast, Level 3 represents a significant technology leap, as it is the first level at which drivers can disengage from the act of driving — often referred to as “mind off.” At Level 3, the vehicle must be able to safely stop in the event of a failure, requiring much more advanced software and hardware.) Examples of Level 2+ include highway assistance or traffic jam assistance. The ability for drivers to take their hands off the wheel and glance away from the road ahead for a few moments makes for a much more relaxing and enjoyable experience, so there is strong consumer interest.
Level 3: Conditional Automation. At Level 3, drivers can fully disengage from the act of driving, but only in specific situations. Conditions could be limited to certain vehicle speeds, road types and weather conditions. But because drivers can apply their focus to some other task — such as looking at a phone or newspaper — this is generally considered the initial entry point into autonomous driving. For example, features such as traffic jam pilot mean that drivers can sit back and relax while the system handles it all — acceleration, steering and braking. In stop-and-go traffic, the vehicle sends an alert to the driver to regain control when the vehicle gets through the traffic jam and vehicle speed increases. The vehicle must also monitor the driver’s state to ensure that the driver resumes control, and be able to come to a safe stop if the driver does not.
Level 4: High Automation. At this level, the vehicle’s autonomous driving system is fully capable of monitoring the driving environment and handling all driving functions for routine routes and conditions. However, depending on the operational design domain (ODD) of the vehicle, the system may on rare occasions need a driver to step in. In those cases, the vehicle can alert the driver that there is, say, an environmental condition that requires a human in control, such as heavy snow.
Level 5: Full Automation. Level 5-capable vehicles are fully autonomous. No driver is required behind the wheel at all. In fact, Level 5 vehicles might not even have a steering wheel or gas/brake pedals. Level 5 vehicles could have “smart cabins” so that passengers can issue voice commands to choose a destination or set cabin conditions such as temperature or choice of media.

Each level of automation requires additional layers of sensors, as the vehicles increasingly assume functions previously controlled by the driver. For example, a Level 1 vehicle might only have one radar and one camera. A Level 5 vehicle, which must be able to navigate any environment it encounters, will require full 360-degree sensing across multiple sensor types.

For example, Aptiv’s autonomous vehicles have included dozens of sensors and redundant, fail-operational architectures, such as Aptiv’s Smart Vehicle Architecture™. 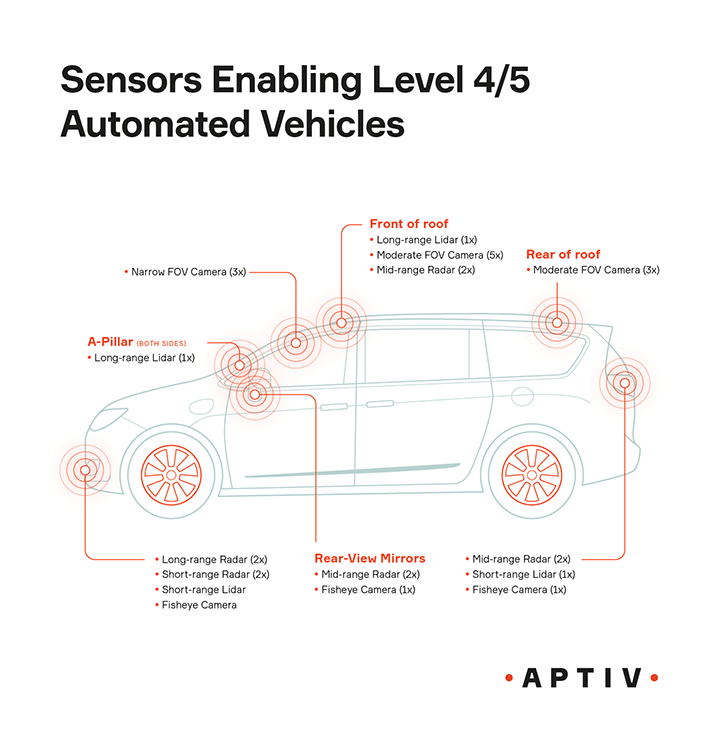 According to Consumer Reports, “Almost every new car sold in the U.S. today falls into a gray area from Level 0 to Level 2. Level 4 and Level 5 cars aren’t yet available for the public to buy, but many of today’s vehicles offer some automated control of the steering wheel, brakes, and/or accelerator,” as seen with adaptive cruise control, lane departure alerts and/or automatic lane changing.
While truly autonomous driving is certainly off in the future, every year automakers integrate additional advanced safety features into their vehicles, reducing accidents and getting drivers more comfortable with the notion of one day taking their hands completely off the steering wheel. Aptiv’s Advanced Safety solutions provide the flexibility and scalability for OEMs to make every vehicle safer as they work toward higher levels of automation. 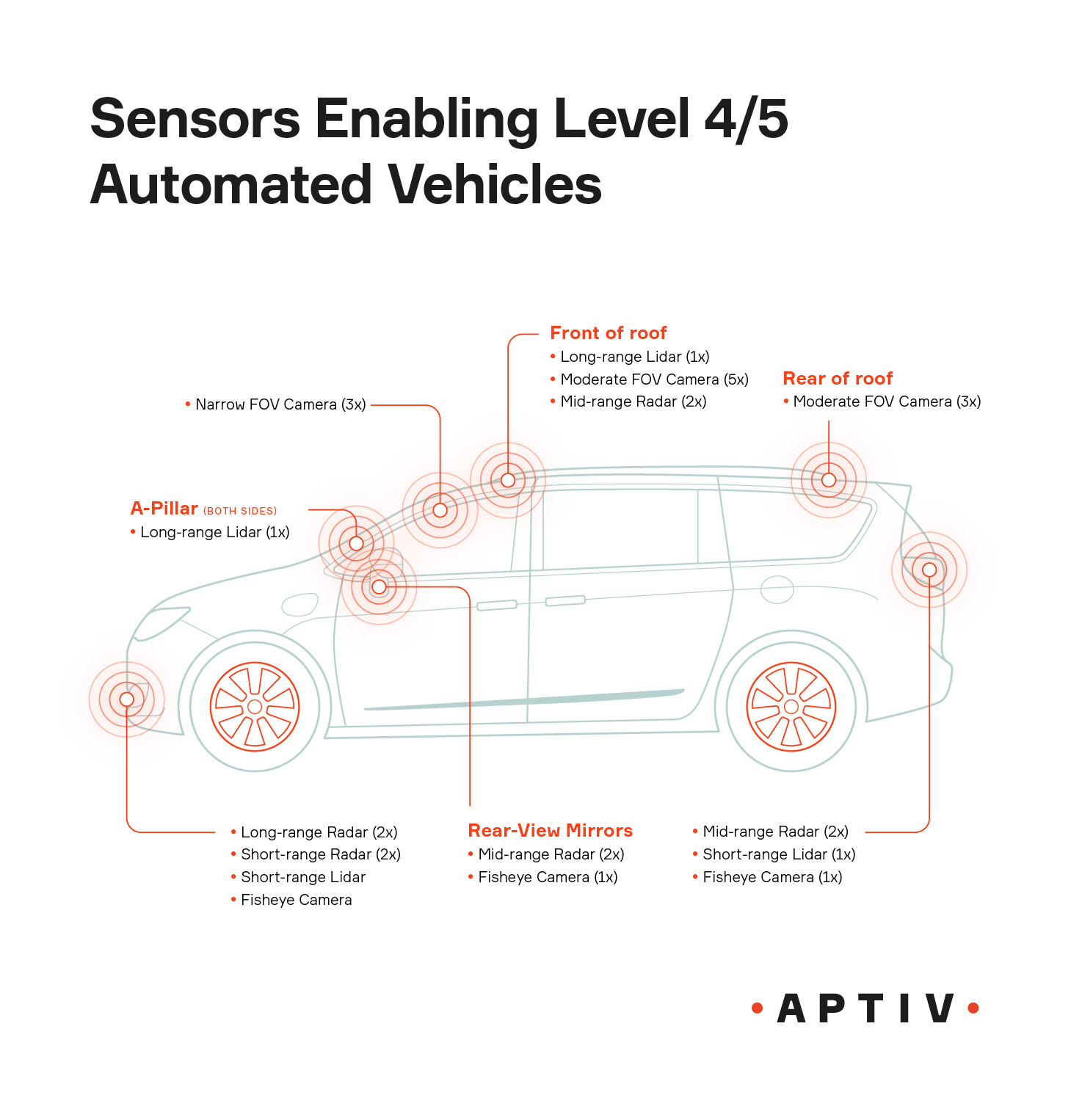